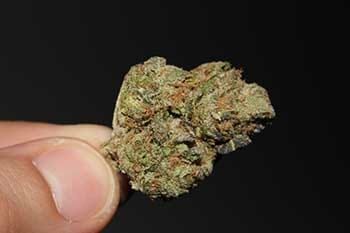 The flowers of a cannabis plant are similar to the flowers of most other plants. They are the reproductive part of the female plant. The Cannabis flower is usually covered in a crystal like substance, they are sticky to the touch and have a fine hairy texture to them. When they are fertilized by the male plant they produce cannabis seeds. If they are not fertilized they continue to produce resin which contains cannabinoid properties such as THC. 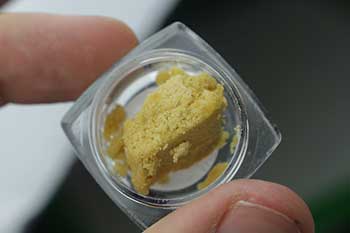 Concentrates are a potent consolidation of cannabinoids that are made by dissolving marijuana in its plant form into a solvent. The resulting product has very high THC levels (generally more than flowers or hashish), and can produce varying products that range from thick sticky oils (BHO) to moldable goo (budder/wax) to resinous bits (shatter). Referred to by a variety of slang terms, the classification of concentrates is often dependent on the manufacturing method and the consistency of the final product. 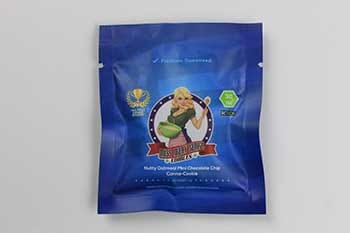 Edibles are edible goods that have been infused with cannabis extracts. They are commonly baked goods such as cookies and brownies, but options as varied as flavored coffee drinks, breads, and candies exist as well. Consuming edibles means the active components from the extracts require longer to take effect as they need to be absorbed through the digestive system. 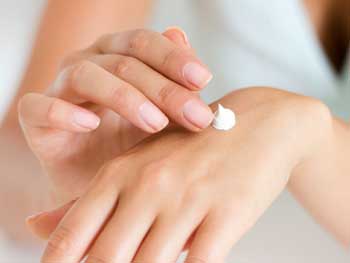 A topical is a type of cannabis product where the active properties of the flowers have been extracted and added to a product such as a lotion or a cream that’s applied to the skin. 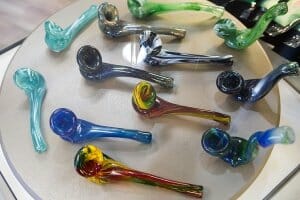 Paraphernalia most commonly refers to a group of apparatus, equipment, or furnishing used for a particular activity. In this case ingesting Marijuana.

Aroma is a term used to describe the general smell and/or taste of a certain plant or flower. Because consumers’ individual definition of aromas (such as “earthy,” skunky,” or “citrus“) can differ somewhat, aroma descriptions are meant as a basic guideline.


A backcross is a hybrid plant that has been bred with one of its parents (or a plant that is genetically similar) in order to create offspring that is closer to that of the the original parent. For example, a grower could breed a plant with its own father to make sure the baby has its dad’s height. This is often done to maintain rarer strains or strengthen those with desired recessive genes.

Cannabis wrapped in a tobacco leaf cigar or cigarillo paper. The cigar may be hollowed out and then re-rolled with cannabis, and the origin of the name was coined due to the popularity of the brand Phillies Blunt Cigars. Blunts often burn longer than joints and are usually found in larger social gatherings.

Bud refers to the actual flower of the marijuana plant. These are the fluffy parts that are harvested and used for recreational or medicinal purposes as they contain the highest concentrations of active cannabinoids.

This is the attendant working behind the counter at your local dispensary or retail cannabis shop who may be able to answer your questions on strains, cannabis products, and make suggestions based on your needs.

Cannabis is a plant genus that produces three species of flowering plants: Cannabis sativa, Cannabis indica, and Cannabis ruderalis. Cannabis sativa and Cannabis indica are used to produce both recreational and medical marijuana. Cannabis ruderalis is rarely farmed due to its natural lower THC content and small stature, but there is some cross-breeding thanks to ruderalis‘s unique ability to auto-flower rather than mature based on light, so there is potential for this variety to grow in popularity. Cannabis is native to Asia, but grows almost anywhere and has long been cultivated both for the production of hemp and to be used as a drug.

Co-op is short for cooperative and refers to a community of patients or consumers in a given area who join together to share and receive marijuana. Co-ops usually have specific membership requirements and the product available is generally exclusive to members. In some states, co-ops exist alongside or in lieu of dispensaries.

This refers to a clipping from a cannabis plant, which can then be rooted and grown through a cloning process of the mother plant, from which the clone was cut.

A cross (referring to crossbreeding) is the result when two different plant strains are bred together. For example, Blue Dream is a cross between Blueberry and Haze strains.

Feminized plants come from seeds that have been selectively bred to produce only female plants. Since female plants are the ones that produce flowers (which is where most of cannabis’ cannabinoids are found), they are the only ones that are used to create marijuana products. Feminized seeds are intended to make things easier for growers by eliminating the need to determine the sex of growing plants and remove males early on to prevent fertilization. Generally, feminized seeds produce the same quality of plants as naturally produced seeds.

Flowering time refers to the time it takes for a plant to produce mature flowers. Cannabis flowering times are affected by the length of daily exposure the plant receives to sun (with the exception of the Cannabis ruderalis species, which flower automatically). When flowering times are reported for a strain, they are general estimates based on how the plants do on average in optimal conditions. Actual flowering times will vary and it is up to the grower to decide when to harvest for maximum benefit.

An heirloom refers to a cannabis strain that was taken from its native homeland and propagated in another geographical location.

Hemp is a fibrous product that can be produced from the male cannabis plant and can be used in the manufacture of rope, paper, beauty products, and a vast array of other products. Hemp plants have no value as a drug since they are males. However, they are still considered illegal in the United States.

Hybrid refers to a plant that is genetically a cross between one or more separate strains of cannabis. Hybrids can happen unintentionally, but they are usually bred specifically to combine desired traits of the original plants. Most marijuana on the market today is some form of hybrid.

Hydroponics refers to a system of gardening that does not use soil. Plants are grown in water and receive their nutrients from the addition of solutions rather than soil. For growers, hydroponic advantages include more control over nutrient intake and stability. In terms of marijuana production, plants grown hydroponically are sometimes said to have cleaner, more distinct flavors.

Kief is a collected amount of trichomes that have been separated from the rest of the marijuana flower. Since trichomes are the sticky crystals that contain the vast majority of the plant’s cannabinoids, kief is known to be extremely potent. Kief is sometimes mistakenly referred to as pollen and is the primary ingredient in hashish production.

Kush refers to a line of cannabis plants that hail from the Hindu Kush mountains in Afghanistan and Pakistan. Kush strains are indicas and have a unique aroma that have given them a large fan base. Specific breeds and plants are unique, but their aroma is generally described as “earthy” and often piney combined with citrus or sweet.

A landrace refers to a local variety of cannabis that has adapted to the environment of its geographic location. This accounts for genetic variation between landrace strains, which have been crossbred to produce the cannabis variety we see today. Landrace strains are oftentimes named after their native region, like Afghani, Thai, and Hawaiian, and traces of landraces are sometimes detectable in the names of their crossbred descendants.

Marijuana is the general term for female cannabis plants or their dried flowers. Females are distinct from male plants in that they are the ones that produce flowers which contain the high percentage of cannabinoids that hold both their medicinal and psychoactive properties.

OG is a term that’s now used to describe many strains, the term stands for “Original Gangster” or “Ocean Grown” depending on which part of California it’s from and quickly shortened to OG Kush. OG Kush grew quickly in fame and reputation. Most OGs are different variations of the original OG Kush genetics or are also ocean grown on the West Coast.

Phenotype is a term that is heard most often in growing. It refers to the general physical characteristics of the plant such as height, color, branching, leaf configuration down to cell structure—any markers that can be used to identify and judge the healthiness of a plant.

Pistils are part of a female plant’s anatomy. On cannabis, it’s identified as the little hair-like extensions on the flowers that range in color from white to red to darker orange-brown. When plants are going to be fertilized, the pistil acts to collect the male pollen. When plants are left unfertilized, as in the case of marijuana, the pistils change and can be indicators of plant ripeness.

Pot is a slang term for marijuana.

Ruderalis is a low-THC cannabis variety that is primarily selected by breeders for its CBD-rich genetics. Unlike Cannabis sativa and indica, which use light cycles to flower, ruderalis is an “autoflowering” variety, meaning it flowers with age. Originating in Russia, ruderalis is a hardy plant that can survive harsh climates.

A strain is a specific variety of a plant species. Strains are developed to produce distinct desired traits in the plant and are usually named by their breeders (or by creative consumers). Strain names often reflect the plant’s appearance, its promised buzz, or its place of origin. Although the medical marijuana industry strives for consistency, strains can easily be mistakenly or purposely misidentified.

THC is an abbreviation for tetrahydrocannabinol. It is the most well-known and most abundantly available cannabinoid in marijuana plants. THC is also the component in marijuana that is responsible for the psychoactive effects, or the “high.” Also known as delta-9-tetracannabinol, it was first isolated in 1964 and is thought to serve as a natural defense for the plant against pests. There is no lethal dose of the compound in its natural form.

Trichomes are the resin production glands of the cannabis plant. In Greek the word means “growth of hair,” and while these sticky little protrusions can make plants appear a little hairy, they are not hairs, nor are they “crystals,” which is how they are often described. THC, CBD and other cannabinoids are all produced in these glands.

Weed is a slang term for marijuana.