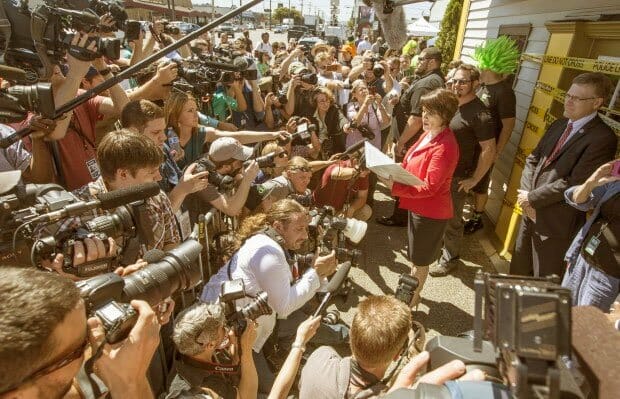 Just after 1pm on July 07, 2014, Deb Green, a 65-year-old marathon running grandmother from Ballard brought her camp chair, a hat, and a book as she planted herself down to become the first person in line to legally purchase marijuana in Seattle since 1937. Doors opened at ‘high noon’ the next day (July 08, 2014) because of a mandated 24-hour quarantine period for all marijuana deliveries (supplied by Nine Point Growth Industries). Due to the initially heavy taxation, prices were $20 per gram, and limited legal product availability led to restricting patrons to purchasing only a single gram at a time. Despite those issues, however, thousands of people attended this Seattle historic event, and in just over two days Cannabis City sold 11 pounds of dried marijuana in single-gram packages.

Looking closely at the photograph, you can see novelty police tape across the door as Dr. James Russ Lathrop, (Doctor of Nursing Practice, Family Nurse Practitioner) welcomes the world’s media with the announcement, “On this day, July 8, 2014, I declare this war over!! (cheers from the crowd) … And I think, I think, it’s time to free the weed!” Together, Dr. Lathrop and Allison Holcomb, a lawyer for the ACLU and the lead architect of the people’s initiative, used giant scissors to cut across the police tape. The original marijuana purchase by Deb Green, the giant scissors, some of the police tape, the lottery award letter to Cannabis City, and other artifacts from that historic day are in the possession of the MOHAI museum of Seattle.